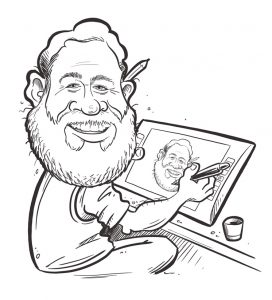 Ryan was born in outer eastern Melbourne the early 1970’s the son of a lovely mountain climbing, horse loving mother and immigrant (Kiwi) Interior designer father.
He spent most of his early childhood with pencil in hand and his best mate Scott, drawing anything from super heroes to fast cars to dinosaurs, sometimes even fast cars being driven by dinosaurs getting chased by super heroes.

Early 1980’s Immigrant Interior designers were becoming more accepted into Australian culture which in-turn allowed Ryan’s family to relocate closer to the city. This meant a clean start for his father’s business and resulted in a new school, new friends and fresh school desks on which
to be drawn for a budding young artist!

After many years spent ignoring teachers requests to stop drawing on desks it was decided a move to a school more inline with Ryan’s talents was in order. Enter Swinburne Secondary College. Here Ryan was able to focus his skills in subjects such as Studio Art, Graphic Design and Art.
Ryan enjoyed his time at Swinburne so much he decided he would do year 11 twice.

After completing his VCE certificate Ryan embarked on a career in soft furnishings, it was such an exciting industry he decided to open his own business making blinds and padded pelmets. After several years of back breaking upholstery work he decided it was time for a change and tried his hand at china and antique restoration. Once again it was just too much excitement for him to bare so a move back to soft furnishings was on the cards.

Come Christmas 2006 and Ryan and his lovely wife Donna discovered they were about to welcome the first of their two sons into the world. This sparked something within Ryan prompting him to do something with his art ( that and he was sick to death of people telling him he should do something with his art )
through the years he had explored airbrushing as an art-form hoping he could make a living from it but the market just wasn’t there. He absolutely loved his time learning from master airbrush artist Laurent Machado or “Master Machado” as he prefers/demands to be know. Ryan decided to become…….
…………a cartoonist!

Fast forward to 2010 and armed with a cool piece of paper from Cengage Education saying he was now a cartoonist. Ryan began his business Blue Dog Cartoons. Why Blue Dog? He’s glad you asked!……. At the time he started on this venture he owned a beautiful big boned Blue Heeler named Max. Max was an ever present companion during endless late nights drawing the midnight oil away. Max sadly passed away at the end of 2016 but his legacy remains as the inspiration for his business name. Ryan’s only regret is that he didn’t start drawing for a living sooner but in the time has been drawing professional he amassed an considerable portfolio which shows his versatility in design and drawing style. Working with clients such as WWE hall of famer Diamond Dallas Page from DDPYOGA on the recent Oscar considered documentary The Resurrection of Jake the Snake, Readheads Matches, Australian Custom Trucks Magazine, Club Life Magazine as well as a current position as editorial cartoonist with NationalTransport Newspaper Big Rigs, Ryan is looking forward to continued growth as an artist through taking on more exciting projects in the future. If you believe he may be of assistance to you and a project you have in mind he is always interested in talking with you.